I was watching News of the World movie and I noticed everyone was trying to keep their side arms hidden from the soldiers in blue. The story takes place in Texas in 1870 and Tom Hanks travels the state reading newspaper articles from various papers to the locals. So I went looking and found this... 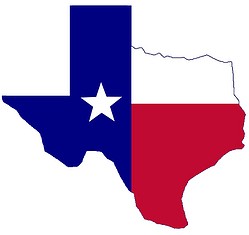 On August 3, the day of the mass shooting in El Paso, I happened to be publishing my latest book, Liar For Jesus … And Guns: A Debunking of David Barton’s Book on the Second Amendment. As its title implies, the book debunks pseudo-historian David...

Most notably, In 1870, Texas, like quite a few other states, passed a law prohibiting the carrying of firearms or any other weapons into any church, school, or other place where people would be assembled – a law that today’s pro-gun crowd would vehemently decry as unconstitutional. But the nineteenth century Texas judges who heard the court challenges to the state’s arms regulation laws found the laws to be perfectly constitutional, with the only exception being the punishment in one of these laws, which was forfeiture of the weapon.


In its 1868 constitution, Texas changed its keeping and bearing arms provision to give the legislature the power to regulate this right:
Every person shall have the right to keep and bear arms, in the lawful defence of himself or the State, under such regulations as the legislature may prescribe.

Two years later, in 1870, the Texas legislature passed An Act Regulating the Right to Keep and Bear Arms, which prohibited carrying any kind of firearm or other dangerous weapon into any church, school, social gathering, or anywhere else where people would be assembled

Texas also made it illegal in 1870 to carry a weapon, either concealed or openly, within a half mile of any polling place during an election

The next year, in 1871, the Texas legislature passed An Act to Regulate the Keeping and Bearing of Deadly Weapons, which prohibited the carrying of pistols, bowie knives, and other dangerous weapons unless a person had reasons to fear an attack or was on their own property, with part of the punishment for violating the law being forfeiture of the weapon to the county

The article goes into the court cases that challenged these laws and which laws where found Constitutional or not... a good short read... Did the Gun Laws survive until the 20th century?...

There is a paper goes into more detail about the laws and how they were passed into law and so forth...

As the foregoing makes clear, at the time of the ratification of the Fourteenth Amendment, restrictions on publicly carrying firearms were not viewed by Texas Republicans as violative of any right. Rather, in 1870 and 1871, faced with a horrifying rate of violence, Texas's Republican state legislature did not feel constrained in taking action to protect the people of Texas. This resulted in a general prohibition on carrying firearms that was aggressively enforced by a newly created state police force. This restriction was consistent with the Republican view that individuals surrendered their personal right to avenge grievances by entrusting government to maintain societal order.

Contrary to the historical accounts presented by many scholars, these laws were obviously not enacted based on racial animus. Then, as now, gun violence weighed most heavily on the black community.16 3 But, unlike the present day inaction of Congress and many state legislatures, in the face of aberrational homicide rates, the government of Texas under Governor Edmund Davis took action. This action was taken with the full support of the black community who it was intended to protect. 6 4 The law was also enforced in a racially neutral manner during the Davis administration. 165 The Texas state police was a fully integrated police force closely aligned with the Republican governor and fully committed to protecting freedmen from violence perpetrated by whites

When interpreting the rights protected by the Fourteenth Amendment, scholars should look to the legal views of those who supported the enactment and ratification of the Fourteenth Amendment rather than those who fought to abscond from the constitutional system, and in the case of Texas Democrats, specifically rejected ratification of the Fourteenth Amendment.1 6 6 The Republican-appointed Supreme Court did not struggle to uphold the prohibition on carrying firearms. Justice Walker, a former Union general, found the law consistent with the laws of the rest of the nation and self-evidently valid and beneficial. In contrast, the law was viewed with suspicion when it came before the "redeemed" Supreme Court, which expressed sympathy for a right to "manly self-defense." These differing views are representative of the differing Republican and Democratic views about gun rights, self-defense, and the role of government. The Republican view was enshrined in the Fourteenth Amendment after the North's victory in the Civil War. This view should be the guide in interpreting the scope of the Second Amendment now.

Many don't realize how important gun control was in the West - they think OK Corral! In San Francisco, the Vigilance Committee took it into their own hands to control guns, and became part of the problem. By 1851, San Francisco had outlawed guns within city limits, and had many of the same regulations as above. In the 1890s, the tongs became violent in Chinatown, and that caused more restrictions. Down Los Angeles way, control of weapons was spurred by the activities of Joaquin Murieta and his gang of bandits. They attacked Chinese mining camps and often distributed the wealth.

Also, one might note the variety of knives and sharp things that were also under strict control! Bowie knifes, dirks, daggers, short swords... Kentucky and Louisiana had a no conceal-carry law in 1813.

A History of Gun Rights in America | AMERICAN HERITAGE

There's a whole library of American gun control law. The Cotton Frontier from Memphis to New Orleans was just as wild as the West ever was - and there had to be a major crackdown on gamblers. By the time of the CW, most of the Southern states had strict laws regarding guns and any concealed weapon. Georgia had one of the strictest by 1837, which was struck down as conflicting with the Constitution. After the CW, most Southern states doubled down on gun control...to prevent the formerly enslaved from owning guns.

An interesting related topic - the NRA. The first president of the NRA was Gen Ambrose Burnside, known - among other things! - for his carbine, which became well used during the CW. He certainly contributed more to the war effort working on that than being a general. However, his dismay at how many of his soldiers couldn't hit the broadside of a barn from 10 feet led him to join a club originally intended to teach people how to properly use and maintain firearms. The membership included a large number of freedmen...who needed to know how to protect themselves.

The issues of firearms in this country has been going on since its foundation, and will probably continue for a very long time with ups and downs - that appears to be the history of it so far.

diane said:
a major crackdown on gamblers.
Click to expand...

As soon as civilization found its way onto the frontier, a number of Western communities began prohibiting the carrying of guns in public. Regardless of such local statutes, peace officers, gamblers and those who lived on the fuzzy edge of law and order—along with some respectable bankers and shopkeepers—found it advisable to pack iron when out and about. In their effort to maintain decorum, the practice of carrying their hardware concealed​
from public view became de rigueur.​

San Francisco, 1853: As traveler John Steele strolled along a bustling thoroughfare, he suddenly found himself being crowded against a […]

O' Be Joyful said:
As soon as civilization found its way onto the frontier, a number of Western communities began prohibiting the carrying of guns in public. Regardless of such local statutes, peace officers, gamblers and those who lived on the fuzzy edge of law and order—along with some respectable bankers and shopkeepers—found it advisable to pack iron when out and about. In their effort to maintain decorum, the practice of carrying their hardware concealed​
from public view became de rigueur.​

San Francisco, 1853: As traveler John Steele strolled along a bustling thoroughfare, he suddenly found himself being crowded against a […]

That was an interesting on how one carried their guns in the old west...

5fish said:
That was an interesting on how one carried their guns in the old west...
Click to expand...

Interesting problem about Hardin's method. He didn't calculate for galluses. The Rangers cornered him on a train - he yelled, "Texas, by God!" and grabbed his guns. They hung up and he dang near yanked his britches up over his head!