As a percentage of their adult white male population, the Southern losses in the ACW were probably closest to British losses in WW1.

How did British culture react and change to these loses as compared to Southern culture?

The first thing that comes to mind is the British viewed the war as a Pyrrhic victory, a tragic mistake forever to be mourned and that they wished never to be repeated.

Ex-Confederates were defiant in defeat. It was a noble sacrifice of heroes to be revered, the Lost Cause. What they didn't win in Congress before the war or on the battlefield during the war they would still seek to win through other means after the war. They tried to continue on as much as possible as if nothing had happened, though some would flee to the West or Florida or internationally to start their lives anew (dispersal that I don't think happened in Britain?).

i don't think it's comparable

for the british in the times of empire war was kinda the standard operations protocoll but they were not accustomed to taking heavy losses (that hadn't happened since the napoleonic wars) - so they certainly wanted to avoid that sort of a blood letting on their side for the future. other than in wwII they weren't seriously attacked on their island. the attacks that happened could be discarded as to be expected from the huns - interestingly the irish called the english huns during the easter rebellion. that all obviously came from that speach a certain wilhelm gave sending off the german contigent to china during the boxer rebellion (they kinda liked the huns' participation, then).

the acw is the founding myth and disaster of the confederacy - the thought and still think it should have worked. in my book it looks a lot more like the hitler-ludendorff putsch* (oops, that didn't work so let's try something else, may be even something less bloody)

* i'm not comparing confederates and nazis here; just the way the reacted to something they thought ought to have worked but didn't

Joshism said:
Ex-Confederates were defiant in defeat. It was a noble sacrifice of heroes to be revered, the Lost Cause. What they didn't win in Congress before the war or on the battlefield during the war they would still seek to win through other means after the war. They tried to continue on as much as possible as if nothing had happened, though some would flee to the West or Florida or internationally to start their lives anew (dispersal that I don't think happened in Britain?)
Click to expand...

The Confederate is similar to other peoples defiant after being defeat in war. "We did loss the war for some other reason than just being beat"

This is Lee's famed General order 9... he is being defiant and blaming other than themselves for the lost of the war.

After four years of arduous service marked by unsurpassed courage and fortitude, the Army of Northern Virginia has been compelled to yield to overwhelming numbers and resources.

I need not tell the survivors of so many hard fought battles, who have remained steadfast to the last, that I have consented to the result from no distrust of them.

But feeling that valour and devotion could accomplish nothing that could compensate for the loss that must have attended the continuance of the contest, I have determined to avoid the useless sacrifice of those whose past services have endeared them to their countrymen.

By the terms of the agreement, officers and men can return to their homes and remain until exchanged. You will take with you the satisfaction that proceeds from the consciousness of duty faithfully performed, and I earnestly pray that a merciful God will extend to you his blessing and protection.

With an unceasing admiration of your constancy and devotion to your Country, and a grateful remembrance of your kind and generous consideration for myself, I bid you an affectionate farewell.

The Germans in the years after World War one, the right wing began to blame the communist, liberals, Jews, and politicians for the lose of the war. They argue the German army was never defeated and the Allies near entered German land. Called : Stab in the back myth... or
Dolchstoßlegende

listen), lit. 'dagger-stab legend')[a] was an antisemitic conspiracy theory that was widely believed and promulgated among right-wing circles in Germany after 1918. It maintained that the Imperial German Army did not lose World War I on the battlefield, but was instead betrayed by certain citizens on the home front—especially Jews, revolutionary socialists who fomented strikes and labor unrest,[1] and other republican politicians who had overthrown the House of Hohenzollern in the German Revolution of 1918–1919. Advocates of the myth denounced the German government leaders who had signed the Armistice of 11 November 1918 as the "November criminals" (Novemberverbrecher).

When Adolf Hitler and the Nazi Party rose to power in 1933, they made the conspiracy theory an integral part of their official history of the 1920s, portraying the Weimar Republic as the work of the "November criminals" who had "stabbed the nation in the back" in order to seize power. Nazi propaganda depicted Weimar Germany as "a morass of corruption, degeneracy, national humiliation, ruthless persecution of the honest 'national opposition'—fourteen years of rule by Jews, Marxists, and 'cultural Bolsheviks', who had at last been swept away by the National Socialist movement under Hitler and the victory of the 'national revolution' of 1933".[2]

Historians inside and outside of Germany unanimously reject the myth, pointing out that the Imperial German Army was out of reserves, was being overwhelmed by the entrance of the United States into the war, and had already lost the war militarily by late 1918.[

WE here in America. The right wing in America argue our army never lost a battle in Vietnam and it was the liberals and politicians that lost the Vietnam war. I remember Reagan pushing this myth forward as well... WE never gave it a name but maybe in one day future historians will give it a name.
Last edited: Apr 13, 2022 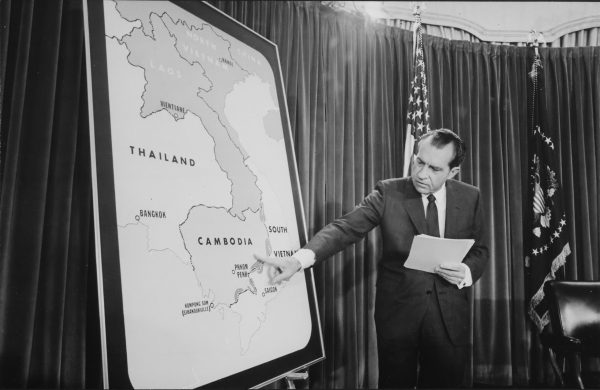 How the Vietnam War Fused the Modern American Right

The domestic political effects of the Vietnam War have been far-reaching.
thediplomat.com

By the early 1970s, however, evangelical revulsion to the New Left came together with longstanding anti-communism to form a new template for a conservative candidate who could pull the factions together. Reaction to the perceived excesses of the New Left, which itself was deeply fragmented and really only unified on the question of opposition to the war, dovetailed with skepticism over Johnson’s management of the war and disapproval of his broader social program. While Nixon’s decision to wind down and end the war proved difficult for anti-communist conservatives to accept, eventually they developed a narrative in which the sins of the Johnson administration had scuttled the war effort abroad, while the treasonous nature of the New Left had undermined resolve at home. By 1980, if not earlier, Ronald Reagan could run on a platform of fierce opposition to communism abroad and fierce opposition to the ghost of the New Left at home; for his supporters, these became two sides of the same coin.

It is undoubtedly fascinating that conservative movement politics in the United States owe such a tremendous debt to the outcome of civil wars in East Asia. The McCarthy movement, which both mobilized the right and threatened to fracture it in the 1950s, emerged from a reaction to the Chinese Communist Party’s victory in the Chinese Civil War. The impact of the Vietnam War on the national psyche was much deeper, and its resonance has lasted even longer. Offenbach’s argument also has some personal resonance. Although not strongly religious, my own grandparents were committed Reagan Republicans who strongly opposed the Vietnam War, in no small part because one of their sons had been drafted and killed in 1967. The association of anti-communism with reaction to the New Left had, by 1980, smoothed over any concerns they had with Reagan’s muscular, confrontational approach to foreign policy. Vietnam was where Johnson had failed, and a conservative either would have done it differently or not done it at all. Although Ronald Reagan believed in the war and supported it wholeheartedly, he could frame himself as someone who could have stopped Vietnam from inflicting deep wounds on U.S. culture and society.

“War ends at the moment when peace permanently wins out. Not when the articles of surrender are signed or the last shot is fired, but when the last shout of a sidewalk battle fades, when the next generation starts to wonder whether the whole thing ever really happened.”— Lee Sandlin

This article a good look at the concept called Pyrrhic Victory... 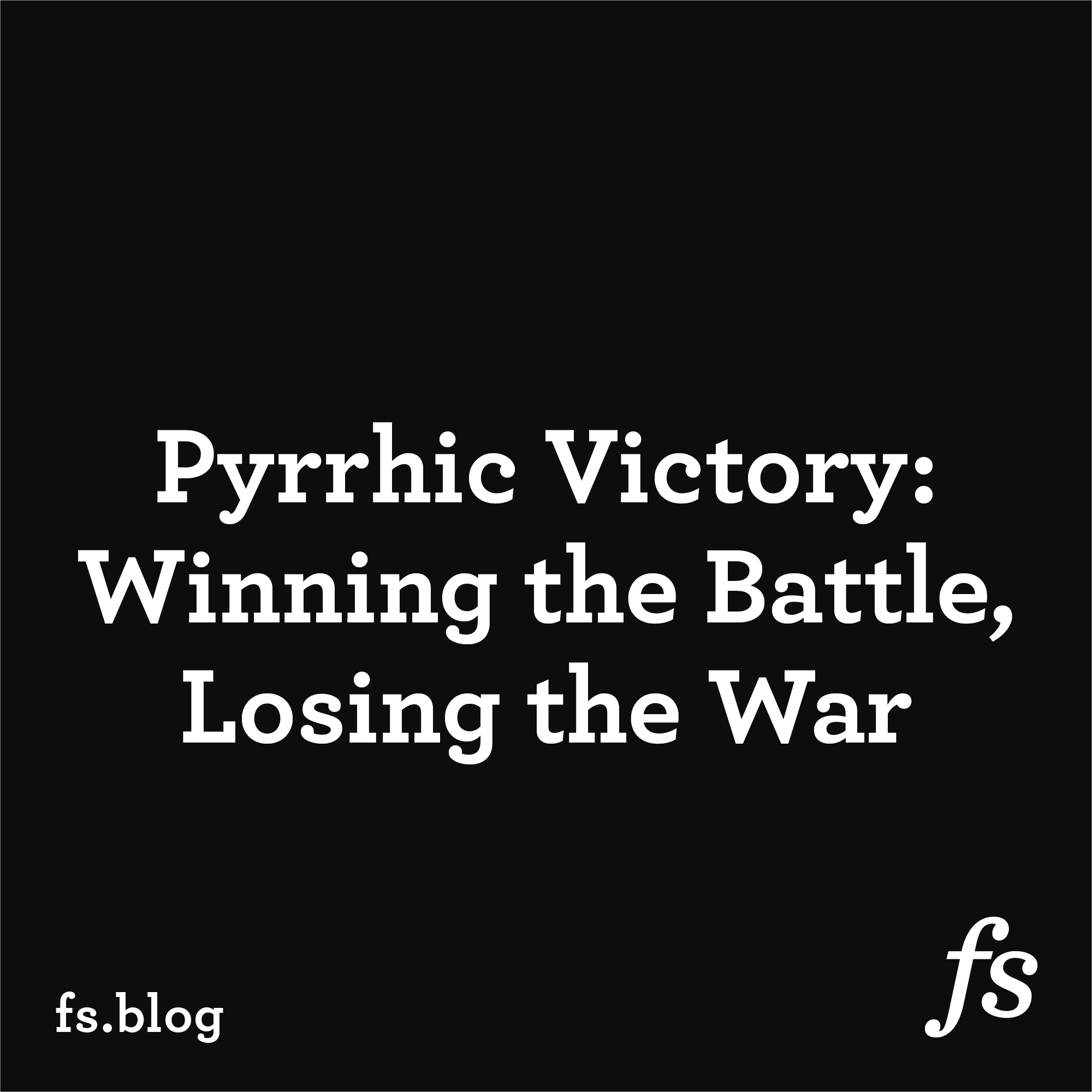 Winning a battle at the expense of your greater well-being and happiness can hardly be counted a victory. Learn why it's often wise to lose a battle so you can win the war.

Vietnam should have been a major wakeup call, but because so many people wanted to make excuses lessons were not learned. Thus mistakes were repeated in Iraq and Afghanistan in the 21st century. I'm doubtful we will learn the lessons from those conflicts either, but at least most of the excuses from Vietnam aren't available to repeat.

The Lost Cause excuse about losing out to overwhelming might certainly describes the Germans in WW1 and WW2. The German offensives in the spring of 1918 were a hail mary that failed, but the Germans kept making excuses why it wasn't time to throw in the towel and tried to hold out for better armistice terms. When the damn broke in the fall in broke hard and fast. The Germans were reeling on the Western Front starting that summer and never stopped as the Entente had overwhelming armor, artillery, and aircraft and had figured out how to effectively combine them. Then in the span of a month Bulgaria then the Ottomans then Austria-Hungary all militarily collapsed and surrendered. Disintegration, not unlike Lee on the way to Appomattox.

I wonder if anybody who thinks Lee should have turned his army into guerrillas recognizes Iraq gave us some idea what that would have been like.

The allies never touched German soil in WWone. The German army was granted a parade through Berlin that basically turned into a victory parade.

https://today-in-wwi.tumblr.com%2Fpost%2F180988379451
The German general that lead the German fight in Africa got a hero's parade and rode his horse...

Lettow-Vorbeck returned to Germany in early March 1919 to a hero's welcome. He led the veterans of the Schutztruppe in their tattered tropical uniforms on a victory parade through the Brandenburg Gate, which was decorated in their honour.