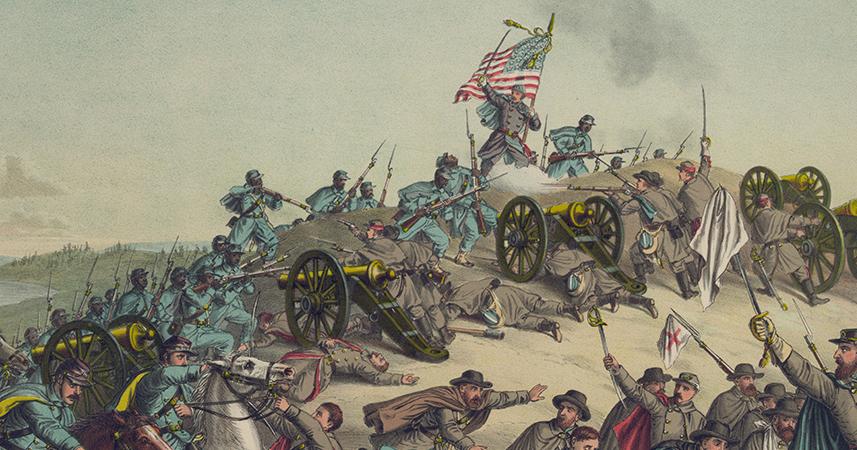 Confederate General John Bell Hood participated in some of the most brutal and iconic actions of the Civil War, including the breakthrough at Gaines’ Mill, the...

At the Battle of Nashville, which took place from December 15 to December 16, 1864, during the American Civil War (1861-65), the once powerful Confederate Army

The Great Moment at Nashville was when the All Color Troops Corps enter the battle...

General George H. Thomas, the Union commander who was a Virginian by birth and who previously harbored doubts about the black soldiers under his command, rode across the battlefield seeing the bodies of black Union soldiers and white Confederate soldiers lying together, said to his officers, “Gentlemen, the question is settled, negro soldiers will fight.”

African American Union soldiers served in the United States Colored Troops (USCT) regiments. The USCT were eight regiments—the 12th, 13th, 14th, 16th, 17th, 18th, 44th, and 100th—all units of the U.S. Colored Infantry led by white officers. An estimated 13,000 USCT soldiers participated in the Battle of Nashville, the largest number of black soldiers on any battlefield so far in the Civil War.

@diane maybe able to help here... The Confederate armies retreated over 100 miles and it was Gen. Forrest that kept checkmating the Union cavalry in hot pursuit, It is said by some to be unappreciated moments in Gen. Forrest famed cavalry career coving Hood's retreat...

One of the most amazing battles of the American Civil War was the running rear guard action of The Army of Tennessee following the Battle of Nashville. The U.S. Army cavalry fought Gen. Hood‘s army for over 100 miles, but lost them after being check-mated more than a dozen times by Lt. Gen. Bedford Forrest. Hood’s Retreat was too late to have changed the outcome of the war, but testimony to the resolve of these grizzled warriors

Forrest was able to rejoin Hood on Dec 18 - and his rear guard action in covering the retreat of the Confederate army was worthy of legend. In fact, if Forrest himself had not conducted this, Hood's army would have been completely annihilated, most captured and a great many more casualties. If he hadn't done anything else noteworthy in the whole war, this one action would have made his name.

I'll need to do a little more research and brushing up! It's a good subject. Hood blamed every general, every officer and every soldier for his defeat, but he did not criticize Forrest.

On his way to Nashville, Hood detached Forrest and his cavalry with Bates' infantry (which, interestingly, included Thomas Benton Smith and his brigade) to Murfreesboro to deal with the Union threat to his right. This was also his planned retreat route. Forrest's commanders included Abraham Buford, Tyree Bell, Red Jackson, and Frank C Armstrong - the best commanders of his best cavalry. It was an amazingly bad command decision considering that Hood planned to attack the heavily fortified Union positions in Nashville without them.

Forrest did not shine at this fight - in fact, it was the first time troops under his command routed. Bates' infantry men suddenly and without much reason, broke for the rear in confusion. Forrest ordered them to halt, swung his sabre at them (and they bobbed like ducks because they didn't know if they were getting the flat or the sharp of it!) In the course of this route Forrest observed the color bearer running to the rear with the flag, the men following him. He shouted for the color bearer to stop, he didn't, and Forrest then shot him dead. He picked up the flag and tried to rally the men. "Rally! Rally! For God's sake, rally!" Too late. Third Murfreesboro was not Forrest's best fight and he was beaten by Robert Milroy of all people but he did succeed in his primary objective - to keep the retreat route open. This proved to be vital within days.

Major General James H Wilson was Forrest's main opponent, and he was a formidable one. He had been harassing Forrest for some time whenever he could to prevent him from harassing Sherman, who was busy in Georgia. The last man Sherman wanted breathing down his neck was Forrest (Wheeler didn't bother him a bit) and Wilson was determined Forrest would not get that chance. In short, Hood had left himself his second string cavalry and deprived himself of the best.

When Forrest received the news of Hood's defeat at Nashville, he said it was a disgraceful affair - which it certainly was - and immediately moved toward the city. He arrived December 18.

diane said:
He picked up the flag and tried to rally the men. "Rally! Rally! For God's sake, rally!" Too late.
Click to expand...

You did not do this justice another one where Forrest and Bates almost shot each other... 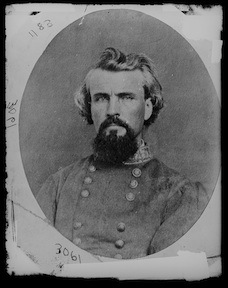 Battle of the Cedars, 150 Years Ago

There was no rest for the weary after the slaughter at Franklin. Gen. Hood ordered most of his army to continue their pursuit of Schofield’s forces to Nashville. Along the way, on December 2, Gen. …

Riding in among the fleeing men, Bate and Forrest tried in vain to rally the men. Forrest was enraged. Drawing his revolver, he shot down one color bearer and took up the flag. “Men for God’s sake rally!” Forrest reportedly cried. “Don’t run off the field & leave the artillery to do all the fighting!”

One witness noted, that Forrest, “Finding his pleadings did not accomplish anything—threw the flag to one of them—saying take the damned dirty rag & go to the rear!” Another account has Forrest throwing the flag on the ground in his rage. Either way it was an ugly scene for all those present.

The ill will did not rest just there. Bate was also enraged, but not at his men as much as at Forrest, whom he blamed for leaving his flank unprotected. “Generals Forrest and Bate had a big row about some parts of the line giving way too soon,” a member of the 1st Florida recorded, “and I thought they would shoot one another, but some other officers got between them and stopped the row.”

I disagree that Forrest threw the flag down - he kept it himself then handed it to another color bearer. The reason he shot the first one was all the men thought he had ordered a retreat and were making one, following the flag. Bates and Forrest did indeed have a fight that nearly ended in gun play - Forrest was depending on Bates' men to hold their position and it was Bates he blamed for failing to handle his brigade. Bates saw it differently, to say the least! However, Forrest was in the right - all but Bates' brigade made an orderly retreat from the field. This brigade had seen a lot of action and were not a bad outfit, nor badly commanded. This type of thing was happening to many veteran brigades - Lee had his stalwart 12th South Carolina run like a gaggle of geese (his words) at a little bit of nothing. Combat fatigue.
You must log in or register to reply here.
Share:
Facebook Twitter Reddit Pinterest Tumblr WhatsApp Email Link
Top